The filtration system was totally renovated, with a great end result 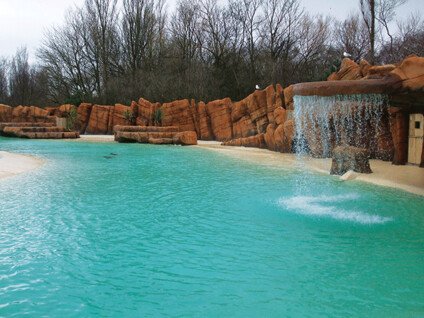 "We have previously worked with zoo and aquarium exhibit installation and maintenance company Marine Aquaculture and provided solutions for various zoos in Europe. We are able to provide integrated solutions which address their specific needs."

At Blackpool Zoo, the sea lions have long been amongst the most popular and well visited group of animals. And in 2010, Britain’s biggest sea lion
enclosure, an integral part of the Active Oceans section of the zoo, underwent a major transformation – receiving around £500,000 worth of refurbishments.

The original sea lion enclosure was built in the 1970s, and not much had changed since then. But after a contemporary design was created by specialist animal enclosure experts Zootech, the overhaul began in 2009.

Today the nine Californian sea lions that call the enclosure home have a more natural setting in which they can live and play. Mock rock walls have replaced concrete, there’s a cascade waterfall, and a section of beach.

The upgrade also worked on making the experience more enjoyable for visitors, with the original amphitheatre expanded to seat 250 people, and the concrete fencing replaced with panes of glass so visitors can see more of the sea lions than ever before.

However, not only the aesthetics of the enclosure were fixed.

The filtration system was totally renovated and a new state of the art pump house was finished at the end of 2009.

“The sea lion enclosure was quite old and desperately in need of updating,” says Tony Fisher, Waterco Europe managing director. “There was a lot of difficulty maintaining water quality and movement, given the size of the pool and the age of the existing filtration system. Also, the existing pool could not be broken into to add pipe work.”

To address these issues, the Blackpool Zoo required an easy to use filtration system, good water quality with low chlorine levels and more water movement to lift debris.

Fisher says the zoo commissioned Waterco to tackle to project because of the positive impact the installation of Waterco products had on the penguin pool (also a part of the Active Oceans Exhibit). “We have previously worked with zoo and aquarium exhibit installation and maintenance company Marine Aquaculture and provided solutions for various zoos in Europe, not to mention Australia,” says Fisher. “We are able to provide integrated solutions which address their specific needs.”

For the sea lion enclosure, Waterco suggested a chlorinated filtration system using two cast iron pumps connected to existing pipe work. The water was then fed though six MultiCyclone centrifugal pre-filters and then through six Micron Deep Bed media filters filled with glass media before the water was chlorinated and then returned to the pool. 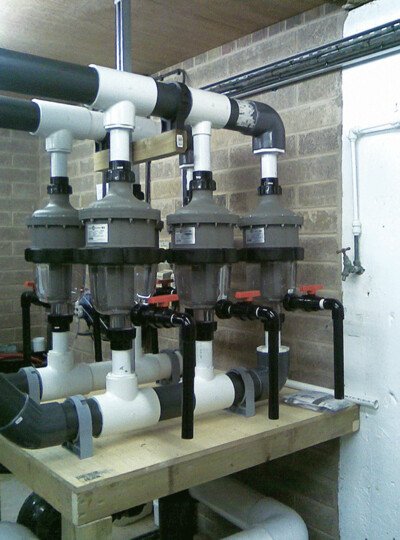 Water is fed though six MultiCyclone pre-filters
and then through six Micron Deep Bed media
filters filled with glass.

Also installed were a hidden Hydrostar pump, which is made for large commercial swimming pools, with a three inch pipe feed to the waterfall, and two poolside pumps disguised in artificial rocks to draw water from the pool and re-circulate to the bottom.

The Waterco solutions were chosen over those of European competitors, with a great end result.

“Since the system was installed, the water quality has remained good and backwashing is easier with MPV power supplies replacing valve batteries,” Fisher says. “The new filtration system copes much better with the volume of water than the old one.” 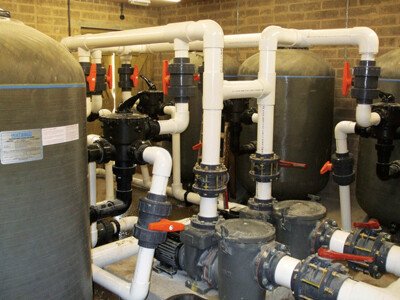