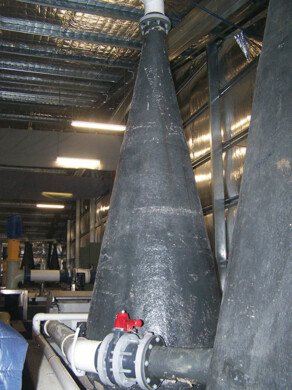 Waterco has launched a specially designed oxygen cone created specifically for the rapidly growing aquaculture market. Waterco’s Oxygen Cone is designed to allow the oxygen levels in water to be managed more effectively for higher quantities of fish per volume of water.

“The correct combination of oxygen, fresh water and food is essential for fish production, and maintaining water oxygen levels is a careful balancing act. By inserting a Waterco Oxygen Cone between the tank and the pump, it allows fish farmers to saturate the water with oxygen and fish to thrive and survive,” says Victor Quijada, Waterco’s water treatment product manager.

“For a long time fish farmers have been looking for a cost effective solution to manage the constant and essential ingredient of oxygen in their fish culture system. The Waterco Oxygen Cone significantly improves efficiency in fish farming with maximum control over the environment where fish are housed, making it a compelling component of the farming process.” 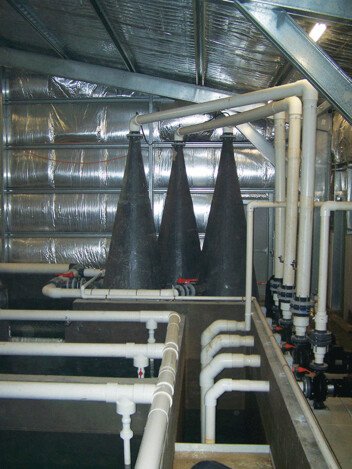 Waterco’s Oxygen Cone is shaped to optimise the saturation of gases in water — up to 100 per cent. Water and oxygen enter at the top of the cone at relatively high speed and then the stream of water pushes the oxygen bubbles down until they completely dissolve.

Aquaculture or fish farming, is developing, expanding and intensifying in almost all regions of the world, and continues to be the fastest growing animal food-producing sector.

The industry standard for most species of fish is up to 50kg of stock to 1000 litres of water. Waterco’s Oxygen Cone enables stock levels to be increased, by directly infusing pure oxygen into the water column. This involves pure oxygen being injected, under pressure inside the cone, into the water delivery line and into the fish culture tanks.

In addition, the design and shape of the oxygen cone ensures the water released from the cone with the oxygen solution is bubble free and no ‘gas bubble’ stress is inflicted on the fish.

The Oxygen Cone is available in different concentrations of dissolved oxygen:

The NSW regional city of Goulburn, situated between Sydney and Canberra in the Southern Tablelands of NSW, is the location of a special fish producing business, Marianvale Murray Cod Fish Farm.

For two years, Australian cleantech company Sustainability Ventures has worked with Marianvale Murray Cod Fish Farm in a joint venture with the land owners and in its capacity as a specialist in the research, development and commercialisation of water technologies in industrial, municipal and agricultural sectors.

“Our focus is to provide solutions for efficient water use. For a farm to be profitable in any capacity, the ratio of stock level to area is an essential calculation,” says Ayal Marek, Director, Sustainability Ventures.

“While still relatively new, we wanted to explore new opportunities of profitability for the fish farm. The concept of an oxygen cone to increase quantities of fish was very desirable and we made inquiries about how it could be employed.”

Aquasonic, an aquaculture manufacturer and distributer based at Wauchope near Port Macquarie, NSW, was employed to deliver the solution that would enable Marianvale Murray Cod Fish Farm to increase the number of fish per cubic metre and increase profitability.

“We work with Waterco for industrial water solutions such as pumps, sand, cartridge, and bag filters, so we were familiar with the organisation and knew they could supply a solution to meet the needs of the Marianvale Murray Cod Fish Farm,” says Bruce Atkinson, Aquasonic.

“We selected two new Waterco Oxygen Cones that increase oxygen content by three or four times. The stock levels that were previously limited to 50kg can now be increased to at least 80kg per 1000 litres,” says Bruce.