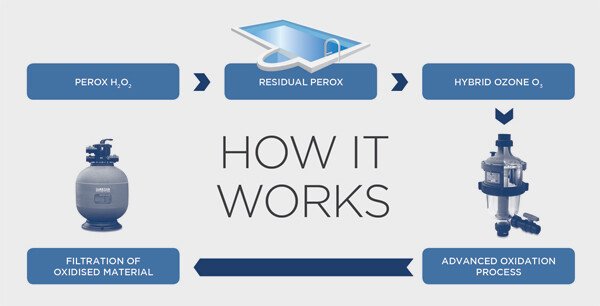 Hydroxypure was launched onto the Australian market in December 2013, after it was initially delayed by electrical approvals in Australia. In 2014 the focus will be on increasing the system's market share in Australia and New Zealand, and marketing the system to China and Malaysia and to the European market in FY15.

Closely linked to the Hydroxypure System is Waterco’s award-winning MultiCyclone. The MultiCyclone centrifugal filter will improve Hydroxypure’s ability to absorb ozone, thus enhancing its performance. This combination has been granted an Australian Innovation Patent and global patent applications have been submitted.

In February 2014, after complying with the Gold Coast Council requirements, the Hydroxypure system was permitted by Council for ongoing use at the Turtle Beach Resort in Mermaid Beach, Queensland. As a result, the Hydroxypure system will be rolled out across all of the resort’s pools, spas, water feature and proposed new $1 million water theme park.

The decision follows a six-month evaluation of the Hydroxypure system, with Gold Coast Council’s Health, Regulatory and Lifeguard Services Branch approving the continued use and extension of use of the water treatment system.

“We believe this is the first large commercial pool in Australia to be approved without chlorine,” says Bryan Goh, Waterco’s group marketing director. We are thrilled that the system has been so successful at Turtle Beach and that the Council has given the okay for it to be so comprehensively rolled out across the Gold Coast.

“The Council was comprehensively briefed on the system prior to it being installed and it approved the initial six-month trial with a strict testing regime. The resort has now been using the Hydroxypure system for the children’s pool and waterfall since May 2013 and we understand the chlorine-free pools are generating many compliments from guests of Turtle Beach.”

The Council’s decision was based on the satisfactory results of the bacteriological water quality testing which was carried out during the trial period in 2013. According to the tests, the chlorine-free method of disinfection has maintained the levels required by Council.

The extended use and installation of the Hydroxypure system across Turtle Beach’s water assets will require quarterly bacteriological water quality testing to ensure that bather load, weather conditions and future development of components and/or chemicals validates the results witnessed during the trial. This testing will be carried out over 12 months, and will be undertaken and analysed by a National Association of Testing Authority (NATA) registered laboratory.